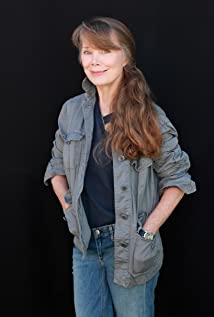 As a kid, Sissy Spacek climbed trees, rode horses, swam, and played in the woods. She was born Mary Elizabeth Spacek on December 25, 1949, in Quitman, Texas, to Virginia Frances (Spilman) and Edwin Arnold Spacek, Sr., a county agricultural agent. Her father's family was of Czech and German origin.Sissy attended Quitman High School and was homecoming queen. After graduating, she embarked on an acting career, gaining interest in the profession through her cousin, actor Rip Torn. Sissy relocated to New York, and through him, enrolled in the New York branch of the Actors Studio. She studied acting at the Lee Strasberg Institute while also pursuing work as a model and singer, appearing in West Village showcases such as the Bitter End for $10 a night. Sissy eventually broke into film and one of her first roles was as Holly in the classic Badlands (1973). The art director on that film was Jack Fisk, with whom she would marry in 1974 and ultimately collaborate on eight films. Sissy followed this landmark film with a star-making and Oscar nominated performance in Carrie (1976), in which she played a humiliated prom queen who goes postal with her telekinesis. Sissy has had an enduring and award winning career in movies and television, which includes an Oscar as Best Actress for Coal Miner's Daughter (1980). The parents of two grown daughters, Sissy and Jack live on a large horse ranch in the foothills of Virginia's Blue Ridge Mountains. Even though she continued to appear in film and television during the late 1980s and 1990s, Sissy devoted most of those years to her family. Then, in 2001, Sissy returned to the big screen in a major way with a powerful performance in In the Bedroom (2001), which not only earned her a sixth Best Actress Oscar nomination, but a win for Best Actress at the Golden Globes, Independent Spirit Awards, and numerous critics association awards. Sissy continues to work steadily as an actress, but in 2012, her credits expanded even further to include a memoir, My Extraordinary Ordinary Life.

The Old Man & the Gun

A Night at the Movies: The Horrors of Stephen King