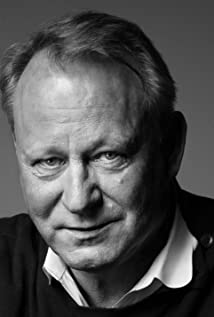 Stellan Skarsgård was born in Gothenburg, Västra Götalands län, Sweden, to Gudrun (Larsson) and Jan Skarsgård. He became a star in his teens through the title role in the TV-series Bombi Bitt och jag (1968). Between the years 1972-88 he was employed at The Royal Dramatic Theatre in Stockholm, where he participated in "Vita rum" (1988), August Strindberg's "Ett drömspel" (1986) and "Mäster Olof" (1988). Simultaneously Skarsgård did outstanding film roles, notably in The Simple-Minded Murderer (1982) by Hans Alfredson and with Fred Ward in American Playhouse: Noon Wine (1985). The fantastic performance gave him both a well-earned Guldbagge and Silver Berlin Bear. He portrayed the Skagen-painter Sören Kröyer in Hip Hip Hurrah! (1987) and the Swedish ambassador Raoul Wallenberg in Good Evening, Mr. Wallenberg (1990), both directed by Kjell Grede. Codename Coq Rouge (1989) and The Democratic Terrorist (1992) he played Jan Guillou's Swedish superagent Carl Hamilton. He also had the leading part in the Oscar nominated The Ox (1991) directed by the world-famous cinematographer Sven Nykvist. Skarsgård did his first (but small) role in an big American film with The Unbearable Lightness of Being (1988). The role of Captain Tupolev in The Hunt for Red October (1990) was at supposed to be biggest part in a Hollywood-film, but unfortunately it was cut down. His breakthrough instead came with Lars von Trier's Breaking the Waves (1996) opposite newcomer Emily Watson. After that Skarsgård got several supporting roles in American films, such as in My Son the Fanatic (1997), Gus Van Sant's Good Will Hunting (1997) and Steven Spielberg's Amistad (1997).

The Man Who Killed Don Quixote

Moomins and the Winter Wonderland