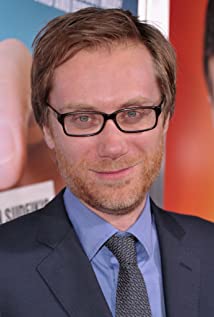 Stephen James Merchant is an English actor, comedian, director, presenter and writer.Alongside Ricky Gervais, Merchant was the co-writer and co-director of the British TV comedy series The Office (2001-2003), and co-writer, co-director, and co-star of both Extras (2005-2007) and Life's Too Short (2011-2013). With Gervais and Karl Pilkington, he hosted The Ricky Gervais Show in its radio, podcast, audio-book, and television formats; the radio version won a bronze Sony Award. He also provided the voice of the robotic "Intelligence Dampening Core" Wheatley in the 2011 video game Portal 2. Merchant co-developed the Sky1 travel series An Idiot Abroad (2010-2012) and co-created Lip Sync Battle (2015-present). In 2021 he starred in, co-wrote, co-produced, and co-directed the 12-part comedy crime series The Outlaws.Merchant has also performed as a stand-up comedian, which led to him writing and starring in the HBO series Hello Ladies (2013-2014), which was based on his stand-up material. He starred in his first play, Richard Bean's The Mentalists, at London's Wyndham's Theatre in 2015. He also appeared as the mutant Caliban in the superhero film Logan (2017), and as serial killer Stephen Port in the 2022 television drama Four Lives. He has received numerous accolades, including two Golden Globe Awards, three BAFTA Awards, a Primetime Emmy Award, and four British Comedy Awards.