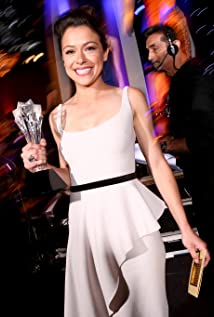 Tatiana Gabrielle Maslany was born September 22, 1985 in Regina, Saskatchewan, to Renate, a translator, and Dan, a woodworker. She graduated from Dr. Martin LeBoldus High school in 2003. She was a well respected student, and participated as often as possible in school productions. She is well known for her participation in the Canadian Improv Games. Maslany starred in the 2006 television movie, Booky Makes Her Mark (2006) along with Megan Follows and Stuart Hughes.She had supporting roles in the films Eastern Promises (2007) and The Vow (2012), and came to fame starring in the series Orphan Black (2013), playing multiple roles. Maslany also had a large role in the 2015 film Woman in Gold (2015), playing a young version of Maria Altmann, Helen Mirren's character.

The Woman Who Loves Giraffes

Two Lovers and a Bear