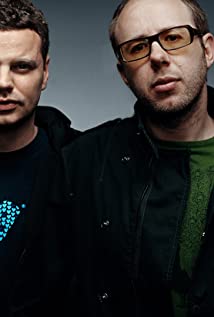 The Chemical Brothers are a British electronic music duo composed of Tom Rowlands and Ed Simons, which originated in Manchester in 1989. They were pioneers at bringing the big beat genre to the forefront of pop culture. In film industry they have composed the soundtrack for the 2011 movie Hannah. The Chemical Brothers' live shows comprise large screens displaying psychedelic images, strobe lights, and lasers that project over the crowd.