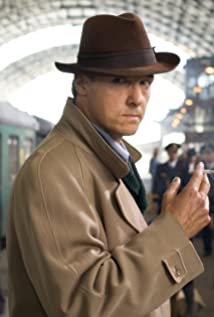 In his early career he often played tormented/troubled characters such as in De Witte Waan, as a death-seeking junkie (1984), and in Zoeken Naar Eileen (1987) as a desperately in love, and in De Avonden (1989) playing Frits van Egters. An often quoted phrase of Hoffman is "I have a dark look on human motives", dating from his debut film Luger (1982) under direction of Theo van Gogh. He also considers himself more "a hardworking man than a gifted actor" as well as someone "who is hard to put in one category." He played main roles in more than sixty movies and TV-series, with directors ranging from Sally Potter, Harry Kumel, Lars Von Trier, Paul Verhoeven to the radical South-African filmmaker Ian Kerkhof. Many Years since The Fourth Man (1982) and his awarded role in Avonden, De (1989), Verhoeven's movie Blackbook put him back in the international arena. Hoffman also directed several documentaries about filmmakers he admires, and is a successful photographer. In 2004 French star Jeanne Moreau officially received the first copy of Hoffman's book "FOTO's Thom Hoffman" during the international Ghent Film Festival. In 1998 Hoffman worked with Don van Dijke in the theater play "Publieksbeschimping; De Gasten Komen".

The Mark of the Angels - Miserere

Molokai: The Story of Father Damien