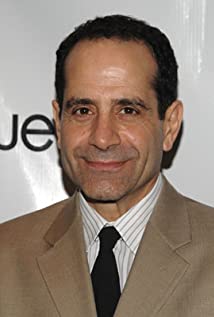 Anthony Marc Shalhoub was born and raised in Green Bay, Wisconsin. His father, Joseph Shalhoub, who owned a grocery chain, emigrated from Lebanon to the United States as an orphan at age ten, later marrying Shalhoub's mother, Helen (Seroogy), who herself was born in Wisconsin, to Lebanese parents. When Tony was six, he was introduced to the theater, in a school production of "The King and I". He graduated from Green Bay East High, and then graduated with a Bachelor's degree in drama from the University of Southern Maine before progressing to the Yale School of Drama, which he left with a Master's degree in Fine Arts.After a time in the American Repertory Theatre, he moved to Broadway where he met his future wife, Brooke Adams, whom he married in 1992. She had an adopted daughter, Josie, who was three years old at the time that Tony and Brooke married. Tony adopted Brooke's own adopted child, Josie Lynn (born 1989) when she was eight. In 1994, the couple adopted another daughter, Sophie (born 1993). Tony's first audition after arriving in Los Angeles was for Italian cabdriver Antonio Scarpacci in the long-running sitcom Wings (1990), which also starred Tim Daly and Steven Weber.Tony next had roles in Men in Black (1997), Men in Black II (2002), Galaxy Quest (1999) and Thir13en Ghosts (2001). However, his biggest break came, playing the obsessive-compulsive detective Adrian Monk in Monk (2002). The series made him a star and earned him four straight Emmy Award nominations between 2003 and 2006, for Outstanding Lead Actor in a Comedy Series. Tony won the award in 2003, 2005 and 2006, proving how popular he has become after the success of "Monk", which has been both brilliant and popular work during all its seasons.