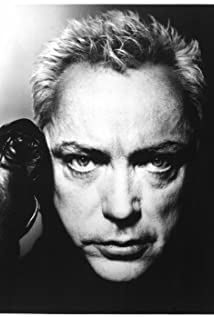 Beginning his life with the same flare for the dramatic that would come to define his career, Udo Kier was born in Köln, Germany near the end of the 2nd world war. The hospital was bombed and buried Kier and his mother in the rubble. Both survived, and Kier would later move to London as a young adult to study English. Kier was discovered in London by Michael Sarne, who cast him in his first role as a gigolo in "Road To Saint Tropez". Kier then starred in Michael Armstrong's extremely controversial "Mark Of The Devil". He would go on to work with Paul Morrissey in Andy Warhol's "Flesh For Frankenstein" and "Blood For Dracula", Dario Argento in "Suspiria", and Rainer Werner Fassbinder in "The Third Generation", "Lili Marllen", and "Lola".Kier entered the American independent cinema scene many years later after meeting Gus Van Sant at the Berlin Film Festival. Van Sant offered Kier the role of Hans, the lamp-singing john in "My Own Private Idaho" with Keanu Reeves and River Phoenix. He would later have roles in Gus Van Sant's "Even Cowgirls Get The Blues" and "Don't Worry He Won't Get Far On Foot" as well as such 90s Hollywood hits as "Ace Ventura: Pet Detective", "Johnny Mnemonic", "Barb Wire", "End Of Violence", "For Love Or Money", "Armagedden", "Blade", and "End Of Days". Kier is probably best known for his collaboration with Lars von Trier, appearing in most of his films including "Medea", "Europa", "Breaking The Waves", "Dancer In TheE Dark", "Dogville", "Manderlay", "Melancholia", "Nymphomaniac (Vol. II)" and "The Kingdom" (Danish TV). Kier's recent renaissance has seen him play memorable roles in the Activision game "Call Of Duty", numerous television roles in North America and Europe, and in the films "Iron Sky", "Brawl In Cell Block 99", "Downsizing", "American Animals", "Bacurau", "The Painted Bird", "The Blazing World" and "Swan Song", among many others.

M - A City Hunts a Murderer