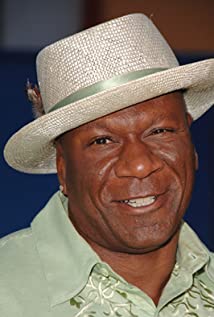 Strikingly featured and muscular American actor Ving Rhames was born Irving Rameses Rhames in Harlem, New York, to Reather, a homemaker, and Ernest Rhames, an auto mechanic. A good student, Ving entered the New York High School of Performing Arts, where he discovered his love of acting. He studied at the Juilliard School of Drama, and began his career in New York theater and in Shakespeare in the Park productions. He first appeared on Broadway in the play "The Winter Boys", in 1984. Also that year, he appeared in front of the cameras for the first time in the TV movie American Playhouse: Go Tell It on the Mountain (1985), and was then quickly cast in minor roles in several popular TV shows, including Miami Vice (1984), Tour of Duty (1987) and Crime Story (1986). Ving continued his rise to fame through his work in soap operas.His big break came in 1994 when Quentin Tarantino cast him as the merciless drug dealer Marsellus Wallace in the mega hit Pulp Fiction (1994). Not long after, director Brian De Palma cast Rhames alongside Tom Cruise as the ace computer hacker Luther Stickell in Mission: Impossible (1996). With solid performances in both these highly popular productions, his face was now well known to moviegoers and the work offers began rolling in more frequently. His next career highlight was playing the lead role in the HBO production of Don King: Only in America (1997). Rhames' performance as the world's most infamous boxing promoter was nothing short of brilliant, and at the 1998 Golden Globe Awards he picked up the award for Best Actor in a Miniseries. However, in an incredible display of compassion, he handed over the award to fellow nominee Jack Lemmon, as he felt Lemmon was a more deserving winner. Rhames then made an attention-grabbing performance in Bringing Out the Dead (1999), reprised his role as Luther Stickell in Mission: Impossible II (2000), contributed his deep bass voice for the character of Cobra Bubbles in Lilo & Stitch (2002), and played a burly cop fighting cannibal zombie hordes in Dawn of the Dead (2004). A keen fitness and weightlifting enthusiast, Rhames is also well known for his strong spiritual beliefs and benevolent attitude towards other people.In a remarkable turn of events whilst filming The Saint of Fort Washington (1993) in New York, he was introduced to a homeless man who turned out to be his long-lost older brother, Junior, who had lost contact with the family after serving in Vietnam. The thrilled Rhames immediately assisted his disheveled brother in getting proper food and clothing and moved him into his own apartment.