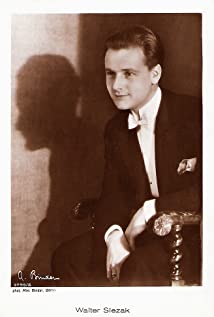 Tall, portly Viennese character actor Walter Slezak simultaneously pursued two different careers after his arrival in America in 1930: one, as a star of musical comedy on the stage, and another, as a portrayer of villains, impish rogues or pompous buffoons on screen.Walter was born in May 1902 in Vienna, Austria, to a musical family, the son of Elisabeth (Wertheim) and famous opera star Leo Slezak. He had Czech, Austrian, and Jewish ancestry. Walter studied medicine but quickly lost interest. For a while, he held a position working in a bank. At the age of twenty, he was spotted in a beer garden by the Hungarian actor/director Mihaly Kertesz (Michael Curtiz) and persuaded to appear in his motion picture Sodom und Gomorrha (1922). Subsequently, the then rather lean Walter Slezak was signed by Ufa and became a matinee idol in German films of the 1920's. Always somewhat too fond of the culinary arts, Slezak over the years put on so much weight that, by the end of the decade, he was no longer considered bankable as a romantic star and became relegated to playing character roles instead.In 1930, Slezak emigrated to the United States and instantly hit it off with public and critics alike in his Broadway debut with the musical comedy 'Meet My Sister' (1930-31). Though publicly modest about his vocal abilities, Slezak gained further plaudits for his role in the Oscar Hammerstein II production, 'Music in the Air' (1932-33), scored by Jerome Kern. By the 1950s, Slezak had become an established name on Broadway, star of shows like 'My 3 Angels' (1953-54), written by Sam and Bella Spewack and directed by José Ferrer; the hit comedy 'The Gazebo' (1958-59), in which he starred as Elliott Nash, opposite Jayne Meadows (filmed afterwards at MGM, with Glenn Ford and Debbie Reynolds in the lead roles); and his greatest success, as the likeable curmudgeon Panisse in the musical production of Marcel Pagnol's 'Fanny', directed by Joshua Logan. For this role, he won the 1955 Tony Award as Best Actor in a Musical. 'Fanny' chalked up an impressive run of 888 performances between 1954 and 1956. In 1959, Slezak fulfilled his dream of emulating his father by singing the part of Zsupan in 'The Gypsy Baron' at the Metropolitan Opera.In motion pictures, Walter Slezak's career took quite a different path. He started in films in 1942, and just two years later, walked away with most of the acting honours for Alfred Hitchcock's claustrophobic thriller Lifeboat (1944). In it, he gave a compelling performance as the callous, methodical Nazi captain, who gradually assumes command of the vessel containing the survivors of the passenger ship torpedoed and sunk by his U-boat. Film critic Bosley Crowther, who had already been impressed with Slezak's previous performance as a Nazi agent in Once Upon a Honeymoon (1942), commented "Nor is he an altogether repulsive or invidious type. As Walter Slezak plays him, he is tricky and sometimes brutal, yes, but he is practical, ingenious and basically courageous in his lonely resolve. Some of his careful deceptions would be regarded as smart and heroic if they came from an American in the same spot" (New York Times, Jan.13 1944). The perceived incongruity of the enemy being portrayed with any sympathy whatever, resulted in criticism from other quarters for both the film and its director.After 'Lifeboat', the ebullient Slezak appeared in a variety of lavish and colourful costume spectaculars: as a flamboyant pirate in the Bob Hope comedy The Princess and the Pirate (1944); as the reprehensible governor Don Alvarado, wooing Maureen O'Hara in the swashbuckler The Spanish Main (1945); and as yet another Spaniard, the boorish Don Pedro Vargas, having similar designs on Judy Garland in the MGM musical The Pirate (1948). He was also memorably evil as Sinbad's treacherous barber Melik in Sinbad, the Sailor (1947), the corrupt gumshoe Arnett in Robert Wise's gangster melodrama Born to Kill (1947), and as the scheming medicine-show man in The Inspector General (1949), starring Danny Kaye. (1949). He was again integral to the plot of Come September (1961), as enterprising major domo to Rock Hudson who secretly runs his employer's luxury villa as a hotel for eleven months of the year. Bosley Crowther described his comic performance as 'perfect'. Slezak further parodied his bad guy image in 'The Clock King' on TV's Batman (1966), then mellowed into the part of sagacious book dealer Strossel in The Wonderful World of the Brothers Grimm (1962) and the amiable Squire Trelawney in the 1972 version of 'Treasure Island'.In his private life, Walter Slezak was known as an experienced pilot, a connoisseur of art, lover of chess and good books. His long career as one of the outstanding character players of his time ended with his retirement in 1980. Despondent over a series of debilitating medical problems, Slezak took his own life in April 1983.

The Mysterious House of Dr. C.

The Wonderful World of the Brothers Grimm