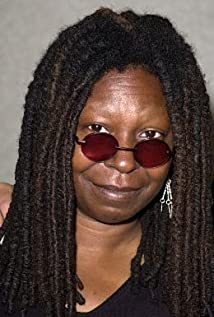 Whoopi Goldberg was born Caryn Elaine Johnson in the Chelsea section of Manhattan on November 13, 1949. Her mother, Emma (Harris), was a teacher and a nurse, and her father, Robert James Johnson, Jr., was a clergyman. Whoopi's recent ancestors were from Georgia, Florida, and Virginia. She worked in a funeral parlor and as a bricklayer while taking small parts on Broadway. She moved to California and worked with improv groups, including Spontaneous Combustion, and developed her skills as a stand-up comedienne. Goldberg came to prominence doing an HBO special and a one-woman show as Moms Mabley. She has been known in her prosperous career as a unique and socially conscious talent with articulately liberal views. Among her boyfriends were Ted Danson and Frank Langella. Goldberg was married three times and was once addicted to drugs.Goldberg had her first big film starring role in The Color Purple (1985). She received much critical acclaim, and an Oscar nomination for her role and became a major star as a result. Subsequent efforts in the late 1980s were, at best, marginal hits. These movies mostly were off-beat to formulaic comedies like Burglar (1987), The Telephone (1988) and Jumpin' Jack Flash (1986). She made her mark as a household name and a mainstay in Hollywood for her Oscar-winning role in the box office smash Ghost (1990). Whoopi Goldberg was at her most famous in the early 1990s, making regular appearances on Star Trek: The Next Generation (1987). She admitted to being a huge fan of the original Star Trek (1966) series and jumped at the opportunity to star in "Star Trek: The Next Generation".Goldberg received another smash hit role in Sister Act (1992). Her fish-out-of-water with some flash seemed to resonate with audiences and it was a box office smash. Whoopi starred in some highly publicized and moderately successful comedies of this time, including Made in America (1993) and Soapdish (1991). Goldberg followed up to her success with Sister Act 2: Back in the Habit (1993), which was well-received but did not seem to match up to the first.As the late 1990s approached, Goldberg seemed to alternate between lead roles in straight comedies such as Eddie (1996) and The Associate (1996), and took supporting parts in more independent minded movies, such as The Deep End of the Ocean (1999) and How Stella Got Her Groove Back (1998). Goldberg never forgot where she came from, hosting many tributes to other legendary entertainment figures. Her most recent movies include Rat Race (2001) and the quietly received Kingdom Come (2001). Goldberg contributes her voice to many cartoons, including The Pagemaster (1994) and Captain Planet and the Planeteers (1990), as Gaia, the voice of the earth. Alternating between big-budget movies, independent movies, tributes, documentaries, and even television movies (including Theodore Rex (1995)).Whoopi is accredited as a truly unique and visible talent in Hollywood. Perhaps she will always be remembered as well for Comic Relief, playing an integral part in almost every benefit concert they had. Whoopi is also the center square in Hollywood Squares (1998), sometimes hosts the Academy Awards, and is an author, with the book "Book."

Caught in His Web

Rita Moreno: Just a Girl Who Decided to Go for It

JFK Revisited: Through the Looking Glass

The Most Magical Story on Earth: 50 Years of Walt Disney World