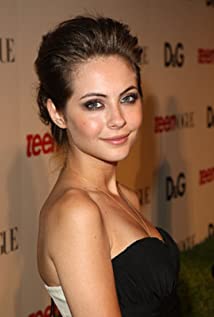 Willa Joanna Chance Holland (born June 18, 1991) is an American actress, voice actress and model. She is known for her role as Kaitlin Cooper in the FOX teen drama The O.C., Agnes Andrews in The CW series Gossip Girl and, most recently, Thea Queen / Speedy in Arrow. Holland was born in Los Angeles, to cinematographer Keith Holland and actress Darnell Gregorio-De Palma. Her mother was remarried to director Brian De Palma from 1995-97. She grew up with two sisters: Brianna Holland (b. 1988) and Piper De Palma (b. 1996). Holland attended Palisades Charter High School for only six weeks because her career was taking off and school peers were dismissive of her acting pursuits. At age seven, Holland played at her stepfather's neighbor's house in The Hamptons, New York. The neighbor, Steven Spielberg, was filming home videos and told Holland's parents, "You've got to put her in front of a camera".Upon returning to Los Angeles that September, Holland signed with Ford Modeling Agency at age seven, and immediately booked a shoot for Burberry. The following year, 1999, De Palma took Holland to a theatrical talent agency. Since then she has appeared in many national commercials. During 2001 when Holland was ten, she worked alongside her cinematographer father in Ordinary Madness (2001). She was even slated to co-star in the 2005 Fox series The Inside with fellow model Rachel Nichols, but left the show when writer Tim Minear was brought in to overhaul it. She played the role of Kaitlin Cooper on The O.C. (2003); initially as a recurring character in season 3, but then as a regular in season four. In December 2007, Holland was cast in the independent drama film Garden Party (2008), playing the role of April, a troubled teenage aspiring model who tries to make it in Los Angeles. In September 2008, The CW announced Holland would appear in three episodes of the second season of the teen-drama television series Gossip Girl (2007), created by The O.C. creator Josh Schwartz. Holland played the role of Agnes Andrews, a rebellious 16-year-old model who befriends and creates havoc for Taylor Momsen's character. She also appeared in the films Middle of Nowhere (2008) and A Summer in Genoa (2008).In March 2010 Holland made a one-off return in the 16th episode of the third season, "The Empire Strikes Jack," which aired March 29, 2010. She voiced Aqua in the PlayStation Portable title, "Kingdom Hearts: Birth by Sleep", which was released on September 7, 2010 in North America. That same year Holland starred in her first major studio film in the apocalyptic thriller film Legion (2010), playing the role of a bratty teenager.She played teen-temptress Janice Heddon in the film Straw Dogs, a remake of the 1971 film of the same name. The film opened in September 2011. In February 2012, Holland was cast in The CW action-adventure series Arrow (2012), based on the Green Arrow comic books, where she plays Thea Queen, the sister of Oliver Queen. In the film Tiger Eyes released in April 2012, Holland starred as Davey Wexler. The film was based on the 1981 novel of the same name written by Judy Blume.